The Shot and The Shack

By jgambone | Published
Mar
01
2017
The Shot
Making the call to go take photos of the night sky isn’t always easy.  Most of the time I spend looking at radar online and a handful of apps my phone, trying to guess if cloud cover will ruin the shot or not.  Sometimes you just need to go.  I met up with fellow photographers Dante Fratto and JJ Bowen, and off onto the beach we went.  I honestly don’t think I could have had better sky conditions.  My prior concerns about a storm that recently pushed through, dissipated while gazing up at the stars.  Way off in the distance, in the Atlantic Ocean, there were still sporadic flashes of lightning that illuminated distant clouds.  We were in the clear.
Being at a location that I have wanted to go to for years and have everything line up the first time was a check mark off the list, and I consider myself quite lucky.  Temperatures dropped into the mid 30’s, there was a rather harrowing and constant wind, and it was 2 am.  I was just getting started.  Time for a star trail while I waited for the Milky Way to rise.
Earth orbits the Sun at an average speed of 67,000 mph, or 18.5 miles a second. What you are seeing is an hour and a half of time passing in the skies above. It took a total of 250 photos, one taken every 20 seconds, and plenty of time editing to produce this image. 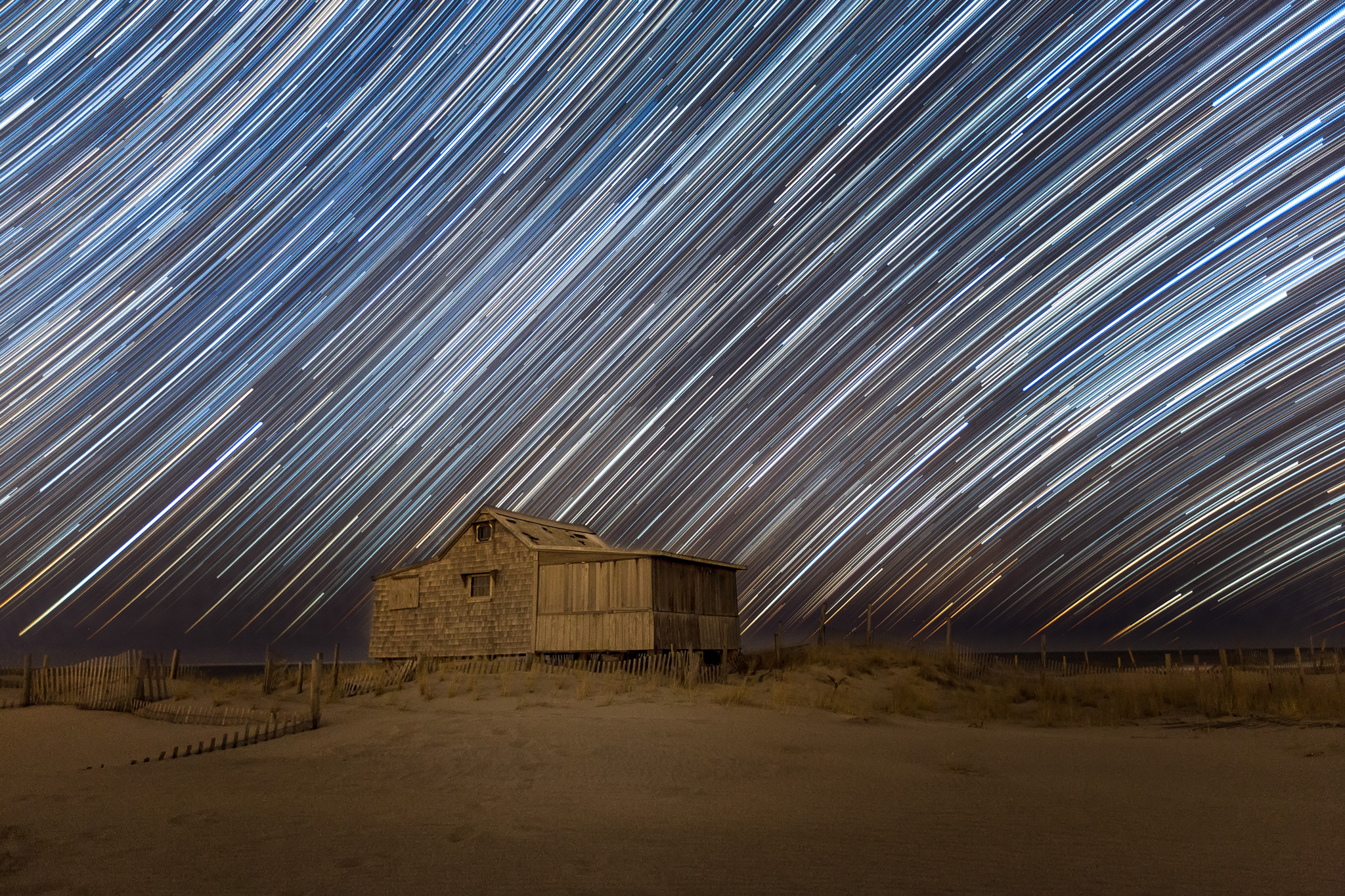 Here is what a single photo in the series looked like:

The galactic core of the Milky Way finally rose above the horizon just around 3:30am. My times are not accurate because I was too busy trying to just keep warm and stay awake.  But I took this photo below around 4 am.  As the months move on, the position and time the Milky Way rise change.  If I were to take this shot in July, I most likely would have to be there by midnight or earlier.  And at that point, the Milky Way would be almost vertical, instead of it’s horizontal appearance here.

Milky Way above the Judge’s Shack

Bonus shot!  I like try try original shots like this one and I have a little series now called “The Light Painter.”  Usually I really like the end result, but I’m not sure about this one.  It was at the end of the night around 5am.  At least I think that’s what time it was. 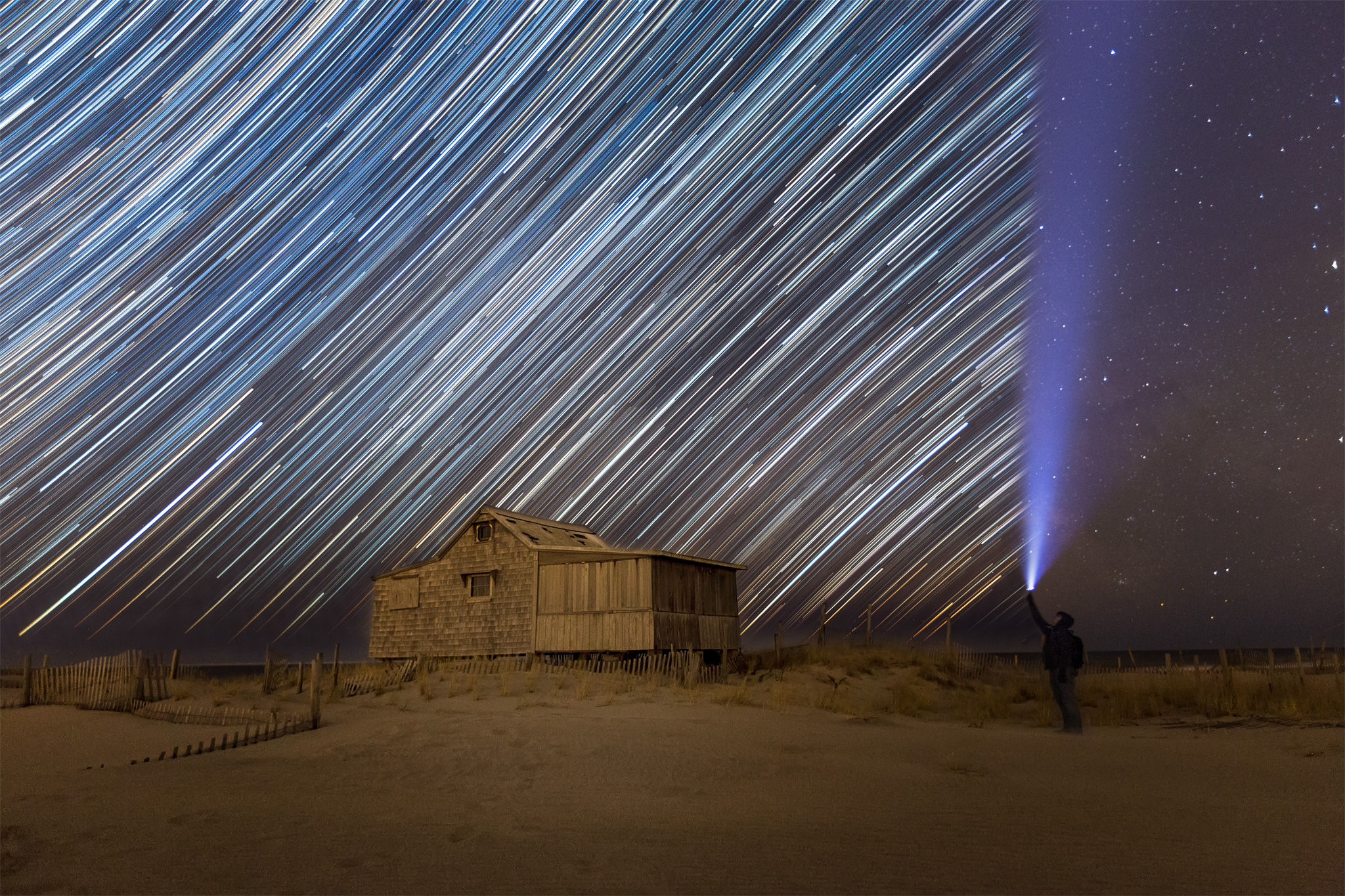 The Shack
Timeline:
1911 – It is believed that the original shack was built in this year
1942 – Judge Richard Hartshorne purchased the shack for $200
1943 – Interior renovations began to convert it from just a fishing shack to a family weekend retreat
1952 – It was moved from it’s original location near the Coast Guard station, to where it sits now
Late 1960’s – A bad coastal storm nearly ripped the porch off
1975 – Judge Richard Hartshorne passed at the age of 87 in September
1993 – Renovations began to repair the damage from a winter storm the took off part of the roof
2001 – Work continued through the 90’s and by this time numerous repairs and improvements were made.
The Hartshorne family would travel down the shore from New Brunswick and enjoy some rustic life on the beach.  But upon their trip back home they encountered, “awful traffic.”   And yes, this was New Jersey back in 1924, so weekend shore traffic is a tradition.  Nearly 18 years passed and they bought their own fishing shack to have extended stays.
Sand dunes nearby once peaked higher than the roof on the shack.  Living here meant you had a surprising amount of activities.  Walking the coast,  you would discover fox dens, or you could pick the wild blueberries and beach plums to make a jam.  Of course, there was plenty of fishing, crabbing and sailing.  Conversely, the old shack has seen plenty of vandalism.  It’s been broken into numerous times.  In the 60’s, it had more than thefts occur. Windows and doors were broken, and walls were smashed and punched.  There were bullet holes found in the glass, and one bullet was lodged in a door.
It has become a long time landmark.  Fishermen meet up there, and photographers have happily taken it’s photo.  It’s made its way into a L.L. Bean catalog and Hallmark calendars.
The shack has no architectural style though.  It’s unique as is its entire story that harkens back to much simpler times.
Facebook Comments