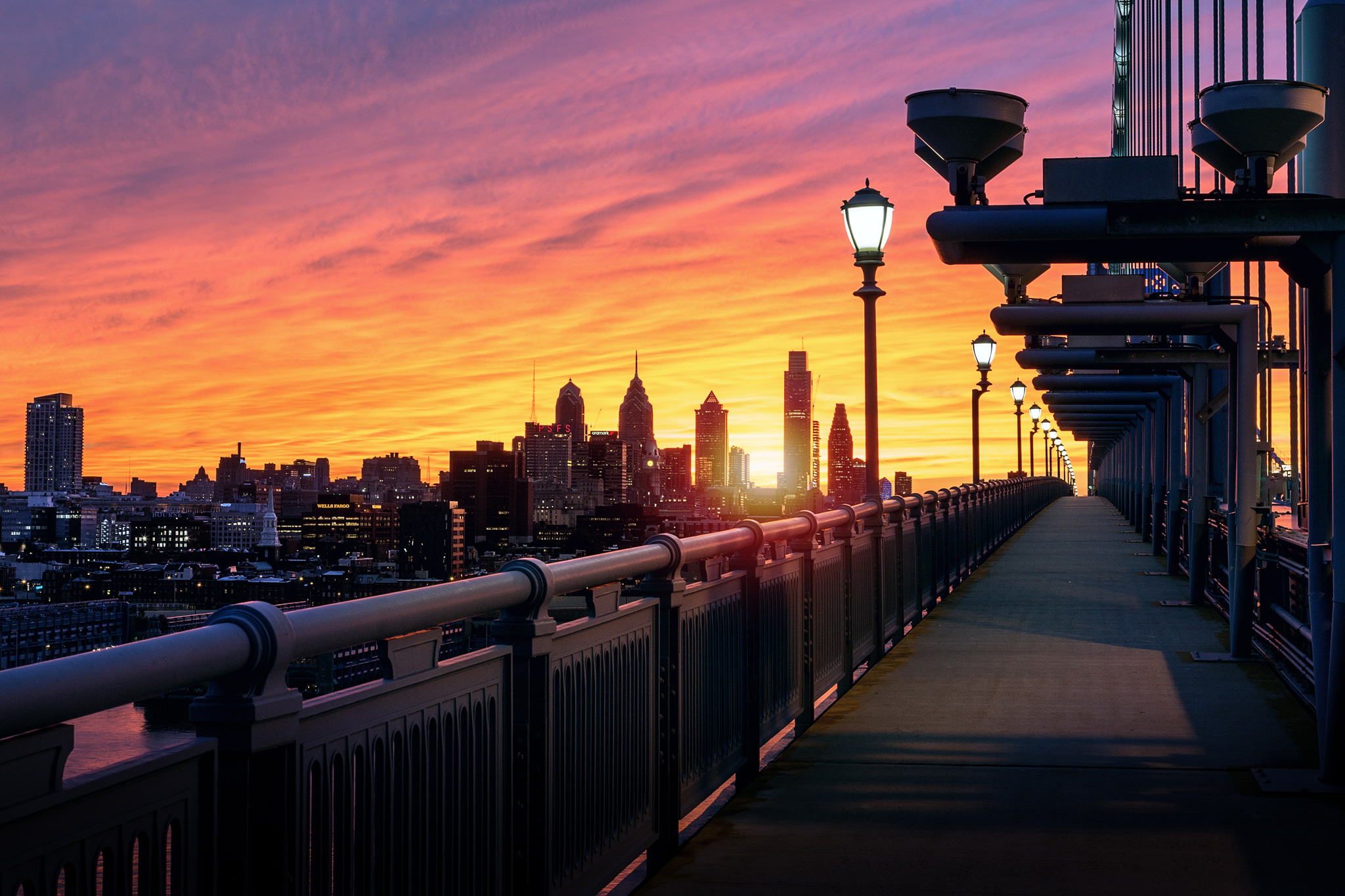 A stunning sunset over Philadelphia, PA.

I thought I’d take you on a photographic journey and share some photos of two back to back sunsets that just kept on giving.  It turned out that there was a low pressure system spinning off of the East coast, and it was kicking up the perfect clouds for a few days.  I may have missed out on the sunrises, but these sunsets more than made up for it.  On this night, I made the journey up onto the Benjamin Franklin Bridge.  I like shooting from this bridge, since I see it every day, and park almost under it where I work at Rutgers University.  Let’s get on with it! 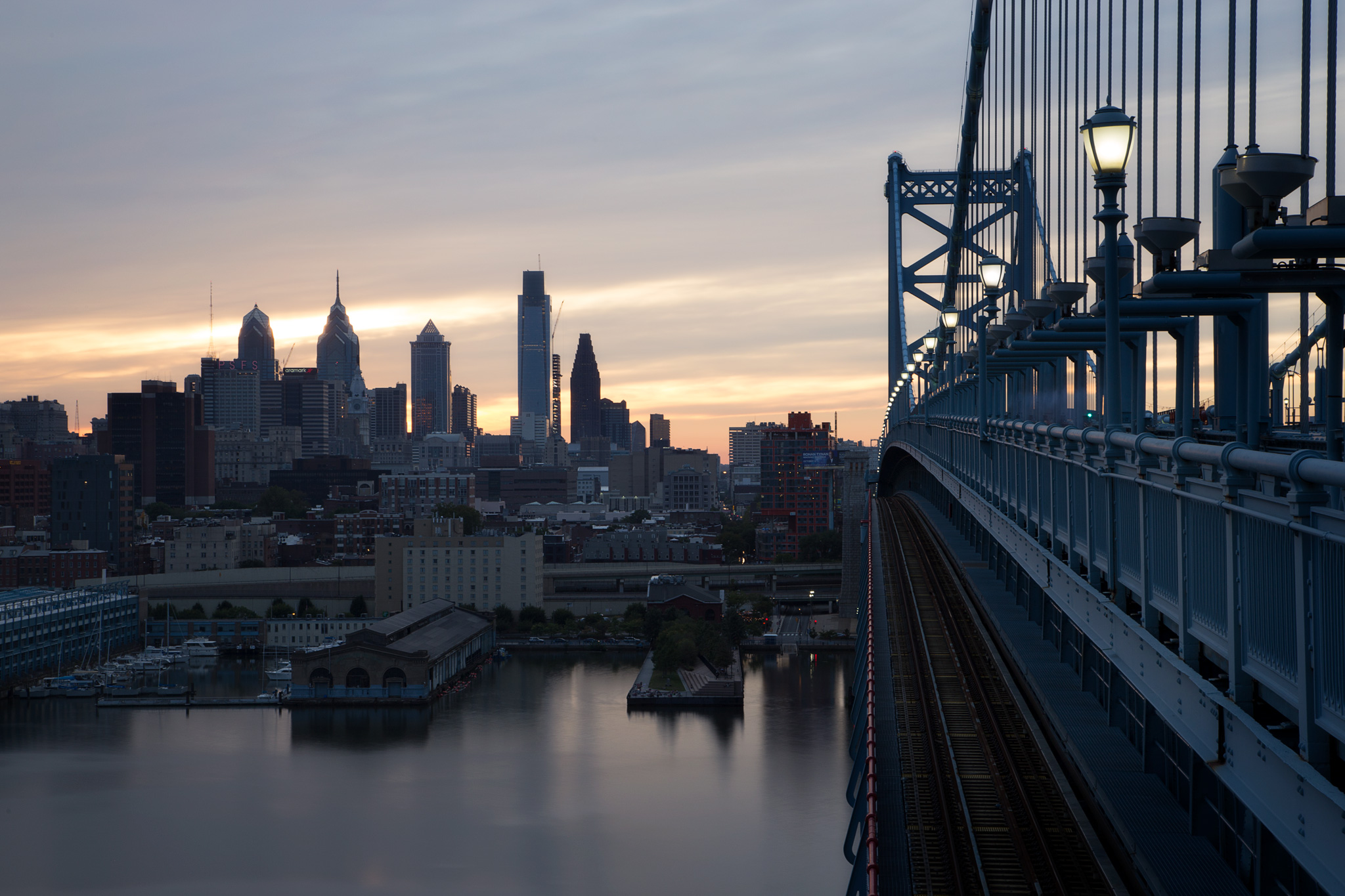 I know what your thinking.  Not very impressive is it?  You’re absolutely right.  But this is how it begins.  The sun still has a way to go before it crosses the horizon, but there are cues that it will be somewhat of a colorful sunset.  The clouds are just starting to pick up slight hues of orange and purple.  “This could be good”, I think to myself. 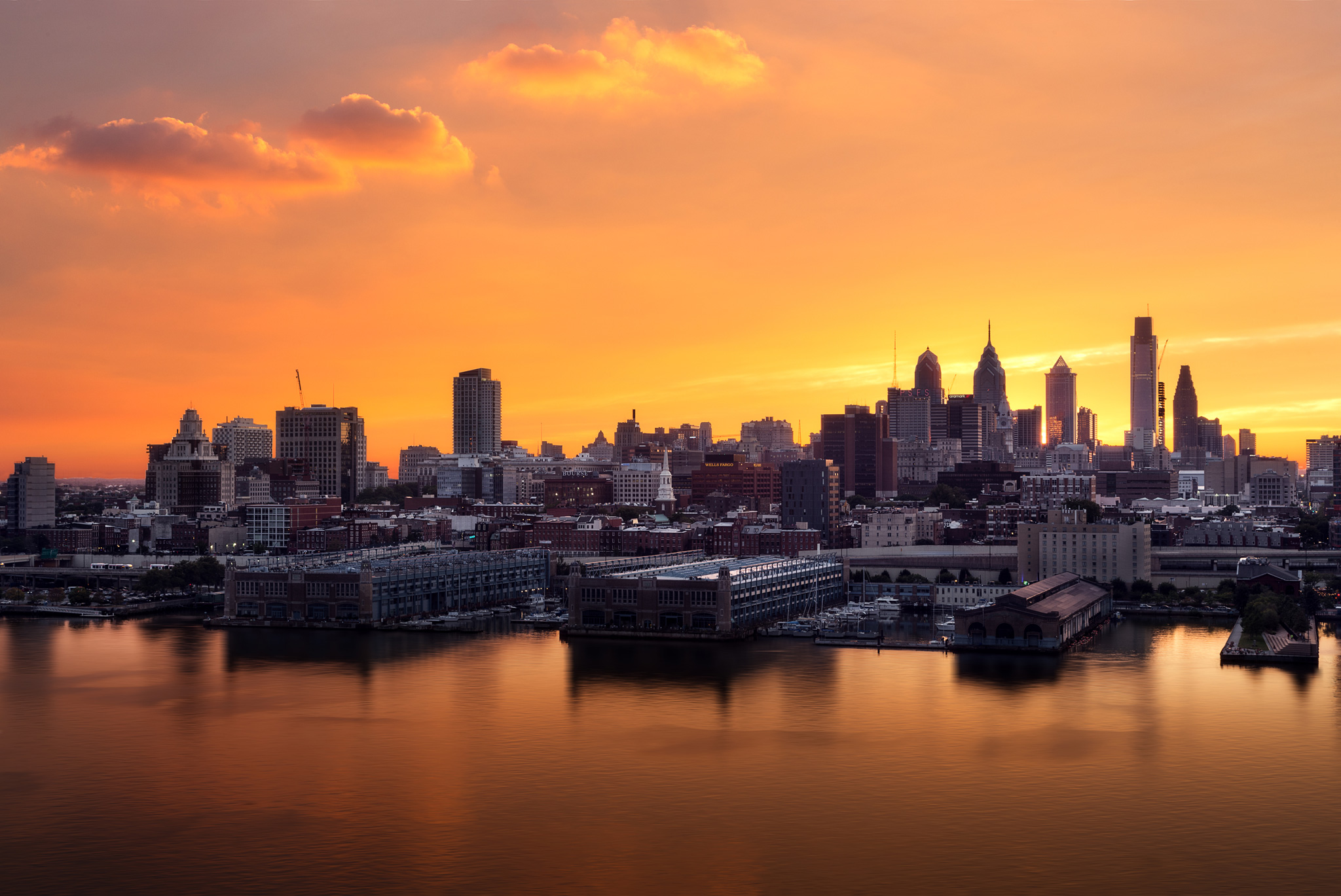 Now we’re talking!  A mere seven minutes passed and the skies have been engulfed with a furious orange.   I’m starting to think this is going to be good, considering the true light show tends to be just at and even after the sun sets.

My hunch and hopes were correct.  About 15 minutes from the previous shot, the real deal showed up.  The yellow and orange colors pull back, while the purple and blue chase it over the city.  It was exhilarating to see.  The walkway shown here is a very popular exercise spot for walkers, runners, and cyclists.  I’d say just about everyone was stopping, taking out their cell phones and snapping away at some point. 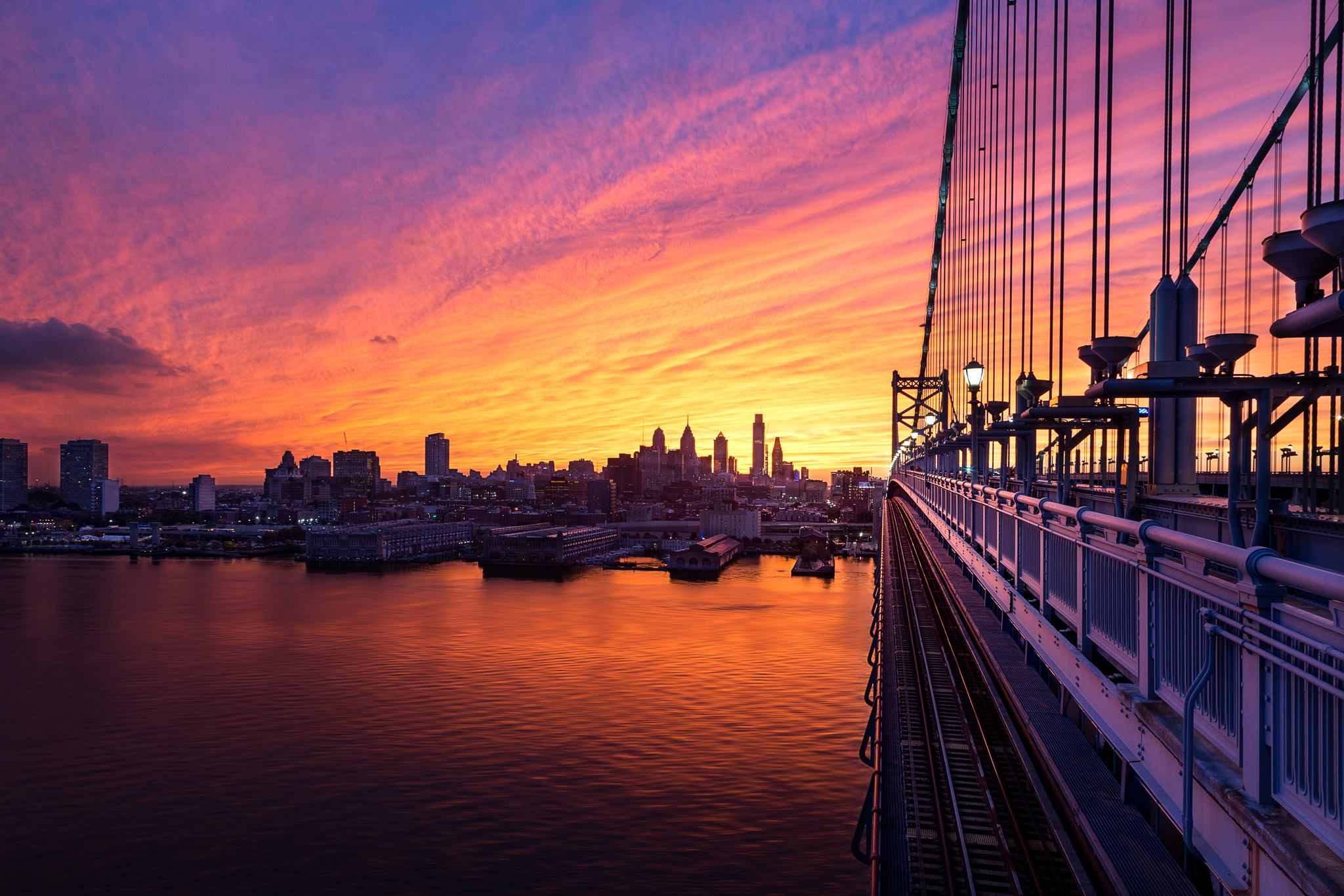 I had to grab as many captures as I could.  It’s not often that I’m in a great location during a spectacular sunset.  After my photo on the walkway, I jumped back over to my original standing location, out of the walkway and had to get as much of the city and colors in one shot. 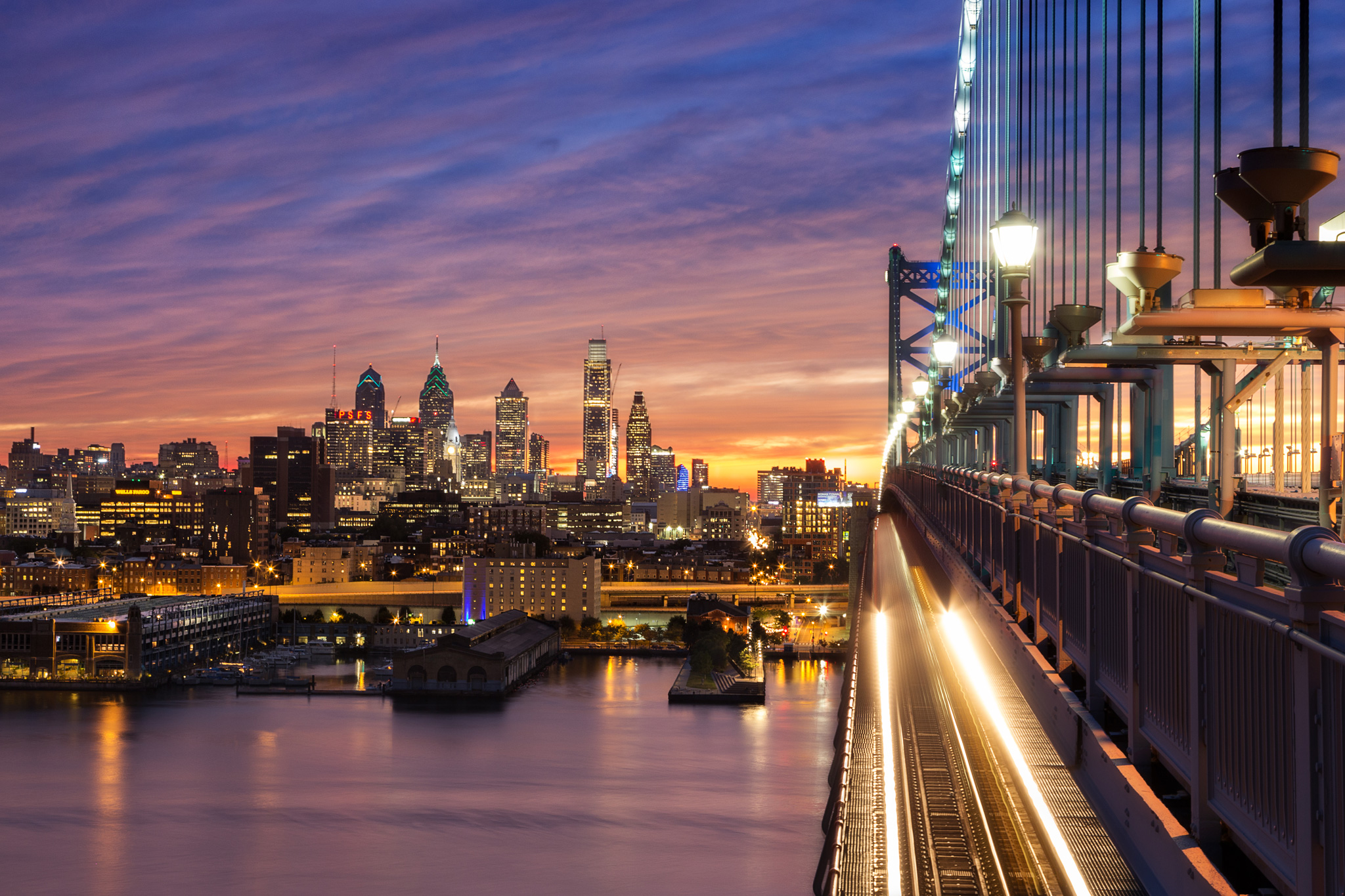 If I’m taking photos up on the bridge, I try and include one with the Patco speedline whizzing by.  I stayed up on the bridge until almost 8:00PM, but the colors had faded by then and it was time to pack up and go home.  I couldn’t ask for a better set really and those 45 minutes of great light don’t happen often.  Or does it?  Onto sunset #2 !! 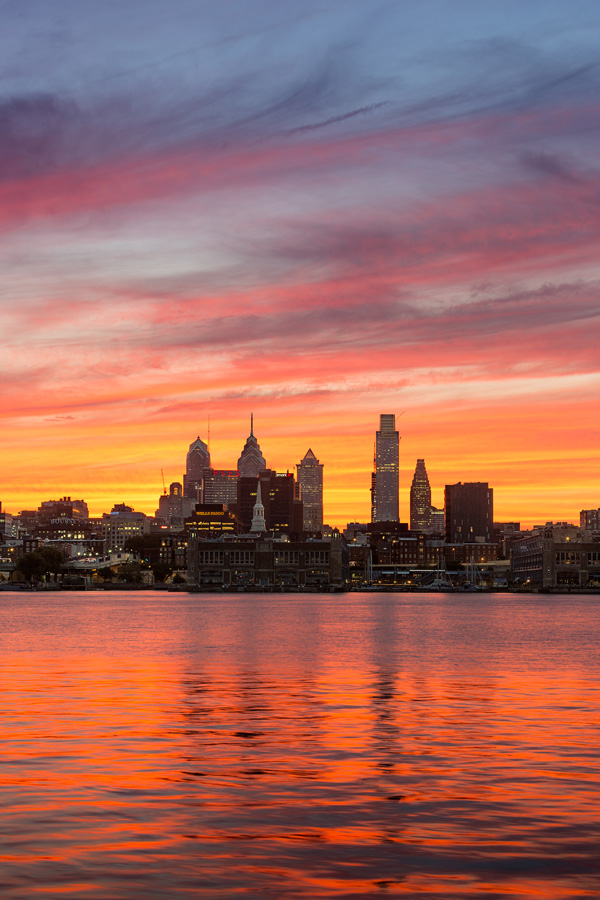 The next night was looking like it may have potential for more color.  The low pressure storm was still spinning out in the Atlantic, and we had very similar conditions from the previous day.  Since it was during the workweek, I didn’t have enough time to go to a further location, so back to the waterfront it was.  Instead of up high, I stayed on the ground though.  This one took it’s time showing color.  It was nice, and if I wasn’t spoiled by the sunset on the night before, I would have been content with it. 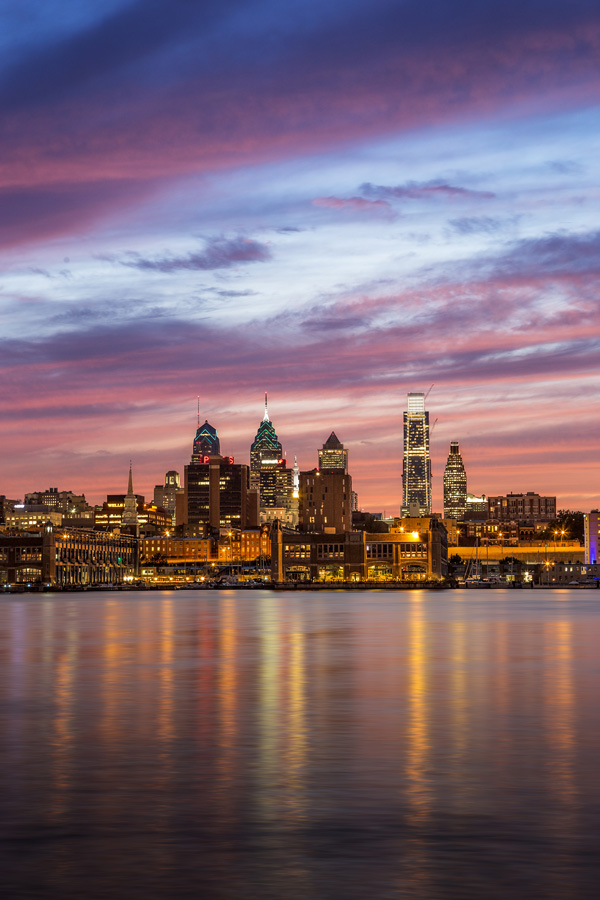 Just over 15 minutes more and we can now see the city lights reflecting nicely in the Delaware river, the city itself is starting to glow and the clouds above are catching just enough light still. 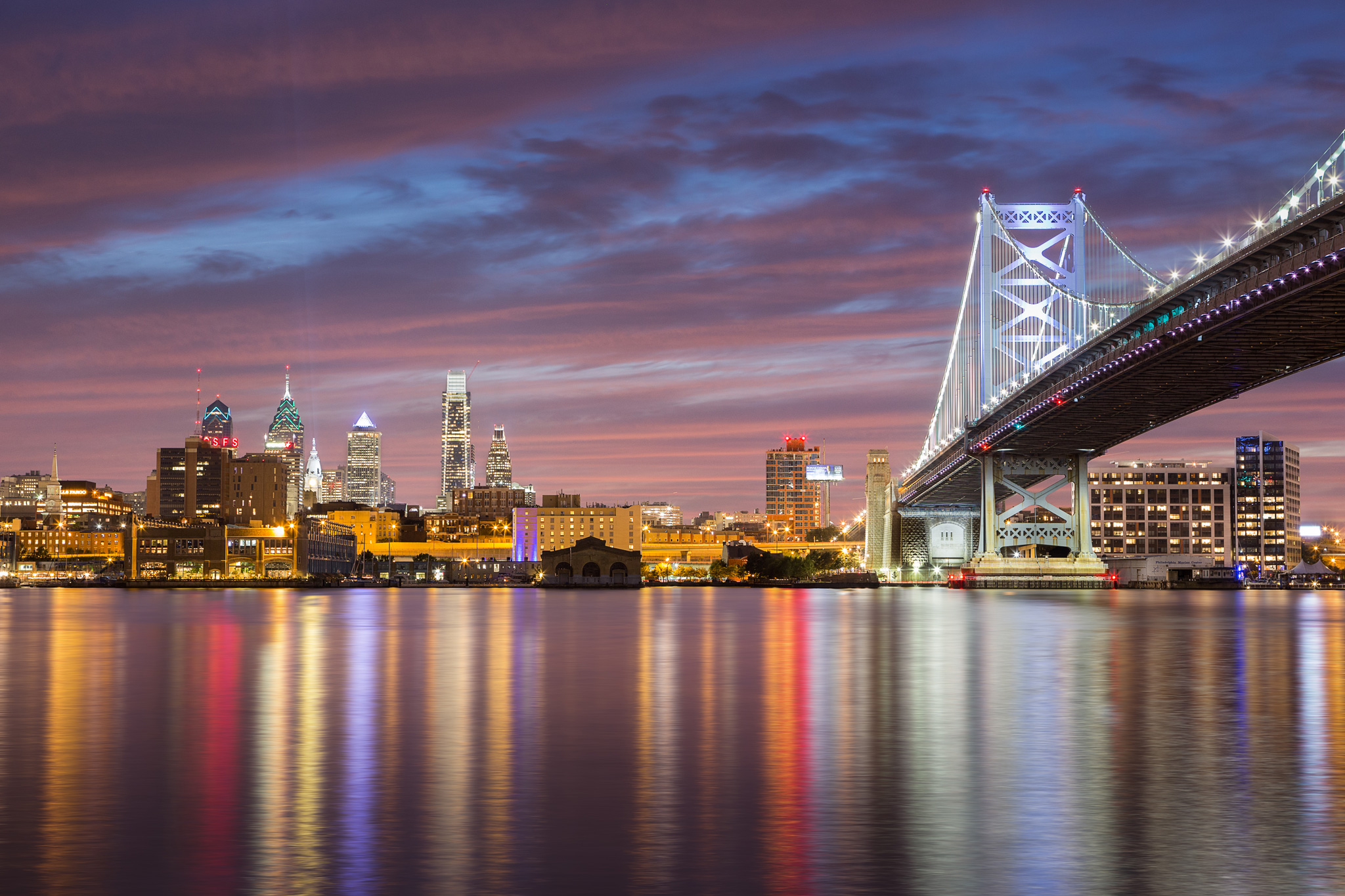 Rounding out the set, I saw that the daylight was putting up a fight still in the sky with the sun setting over 40 minutes ago.  This is when you are able to really get a nice balance above and below the city.  It all came together nicely, with deeper and more saturated colors in the river, the strong city glow, and just enough subtle colors in the sky.

I hope you enjoyed this little sunset trip.  Please feel free to share and comment below.  I’ll be updating my Etsy store soon, with the addition of a few of the photographs posting here.