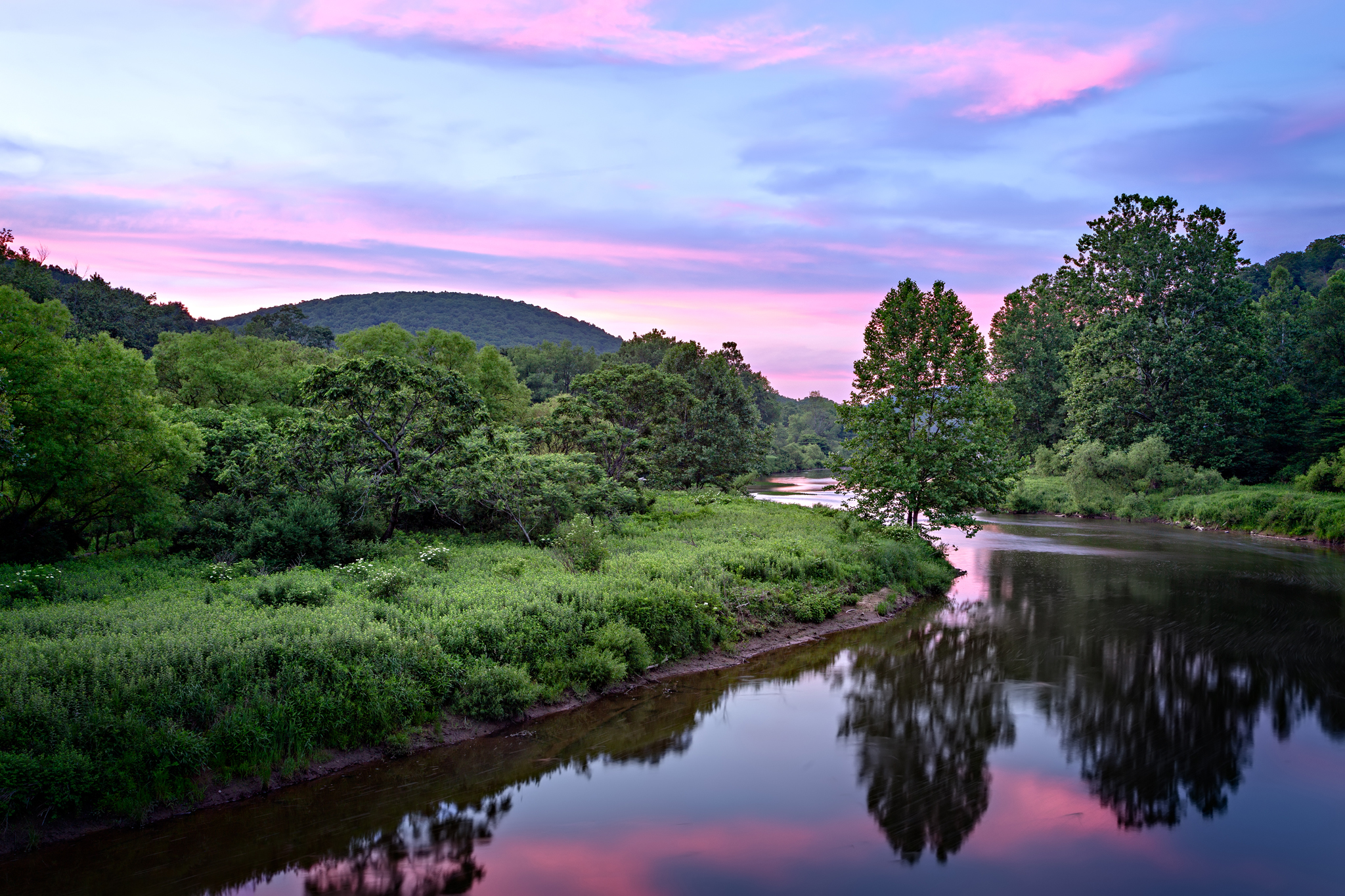 Sunset at the first stop in Western Pennsylvania

They have many nicknames all over the world.  Glow Worms, Glow Flies, Moon Bugs, Lightning Bugs, Fire Devils, Hotaru, and Blinkies.  I’ll keep it to what I grew up calling them though – Fireflies!  For at least seven years I’ve wanted to photograph them, and in the past two years I’ve actually been able to.   It’s taken some time to develop the skill set and begin to process the images that I have created in my mind.  I decided to step up my game, and challenge myself with a trip out to Western Pennsylvania, specifically the Allegheny National Forest.   I spent months ahead of the trip doing research online, reaching out to people, and analyzing maps trying to come up with areas that had potential.  With six and a half hours of driving (THANKS ROAD CONSTRUCTION), I showed up later than I wanted to on the first night.  That stress melted  away when I arrived at the above location.  I was treated to a sunset that set things right for the trip.  The weather was on my side, or so I thought.  More on that later. 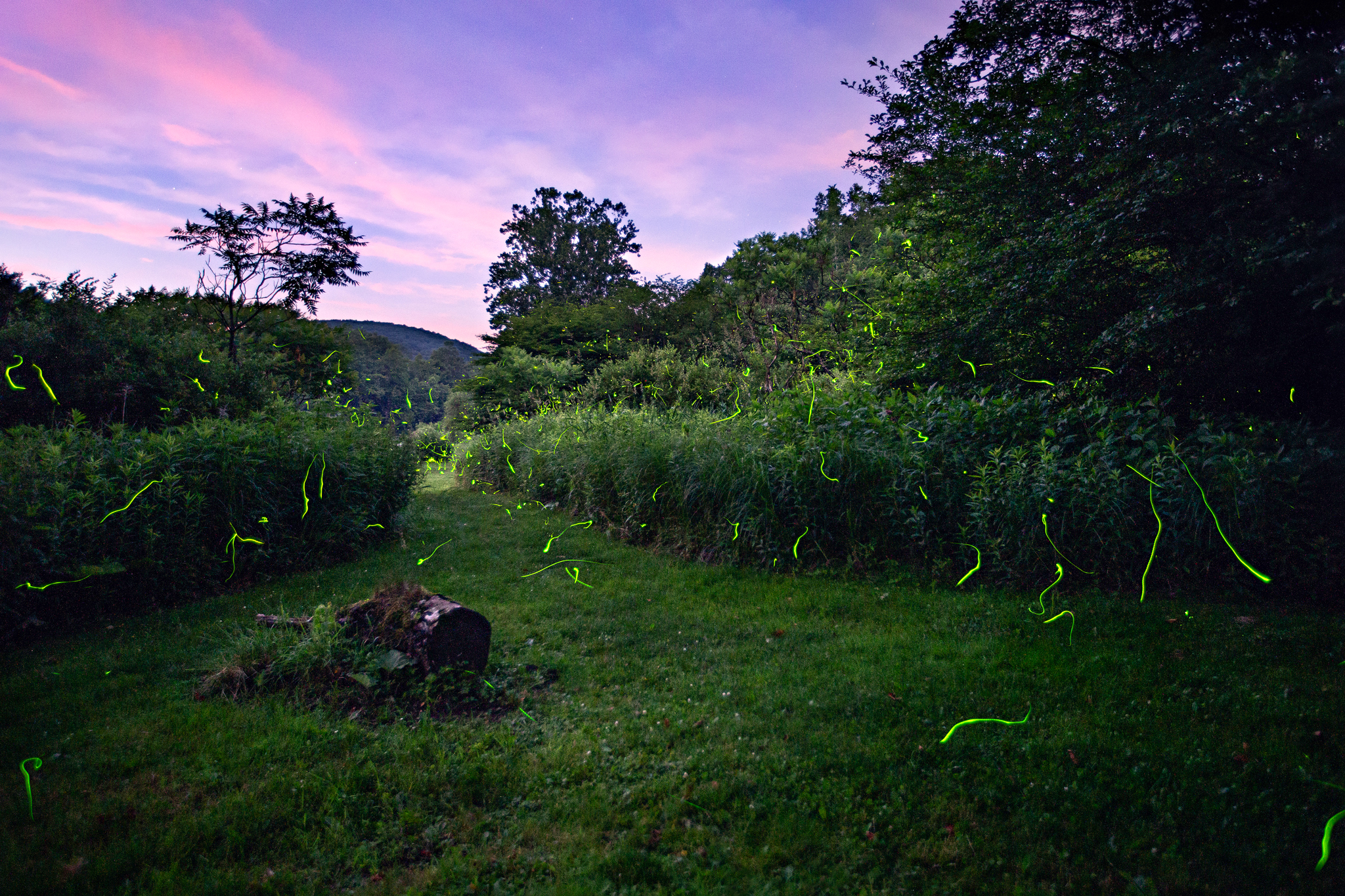 While the sunset was finishing up draping the sky with pastel hues, the first colony of Chinese Lanterns began their dance.  They are notable by their longer glow, and tend to hover upwards or even sideways while lit.  When you take the time to sit, relax and watch them, time itself just seems to slow down. Luckily, the temperature was perfect for both beetle and photographer staying in the upper 60’s.  You won’t see them if the temp drops below 50, or if there are heavy rains. 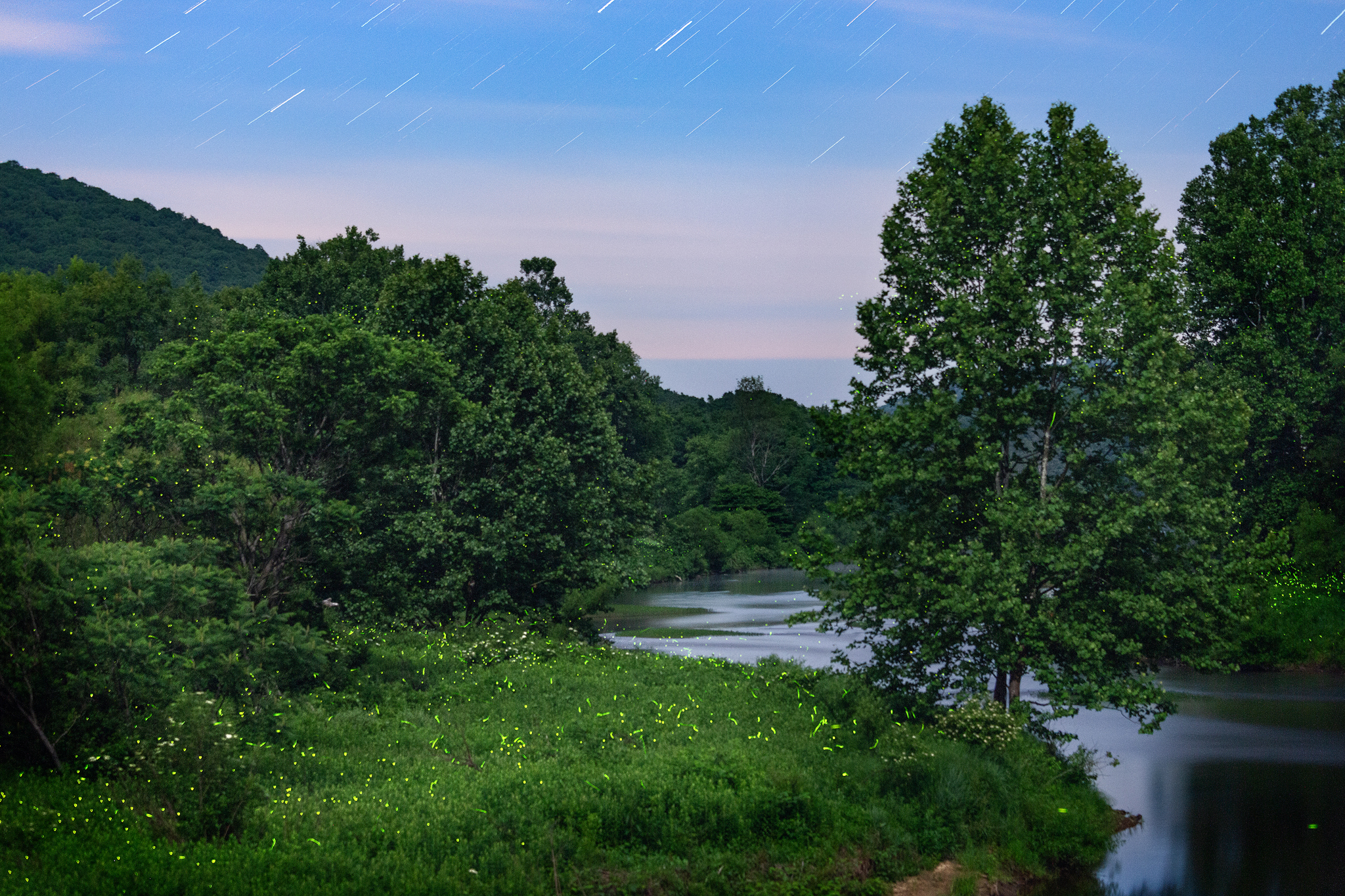 Back at the original sunset location, the stars had some local competition with the glow of fireflies.  As you can see, some breeds really prefer just staying up in the trees.  This is about 6 minutes worth of time passing.  The time spent taking these photos was great to get warmed up for the real show that I wanted to witness with my own eyes. 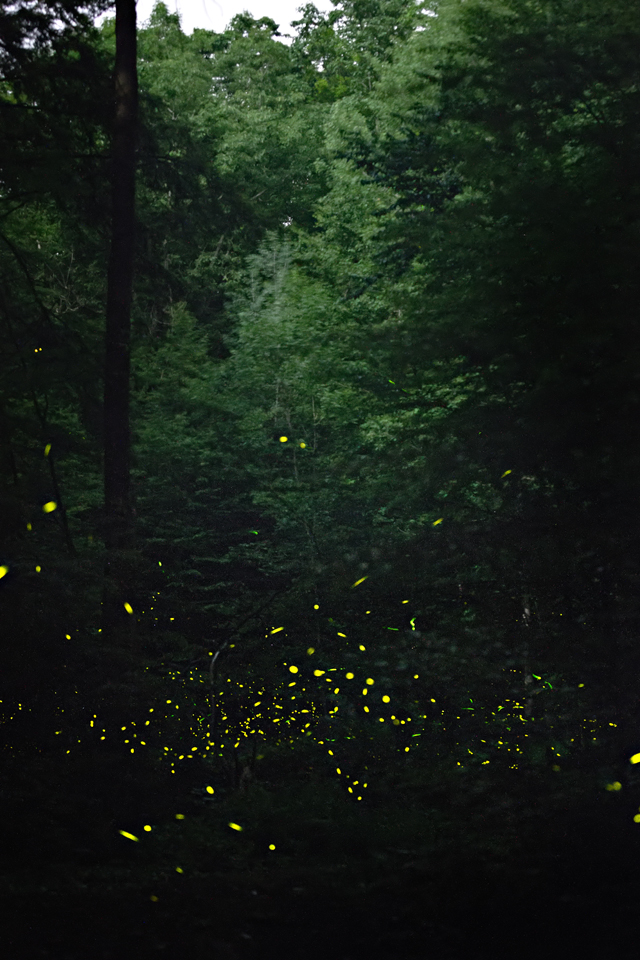 The real show begins in the above photo, and I was blessed with a touch of moonlight for a very short amount of time.  The Synchronous fireflies are the closest thing to real life magic in nature in my opinion.  A short walk into an impossibly dark forest, revealed this special colony.  I’ll be the first to admit, these are NOT the best, sharpest photos of them.  But I had to really push my camera gear to get something to show.  I also know that Sir David Attenborough had a film crew out in these areas and even they had issues trying to film them because of the darkness.

Typically, they don’t appear until after 10 PM, and are in large groups.  When they flash in unison, it’s anywhere from 6-8 times in a row and then stop completely before starting over.  It’s almost as if someone had the largest set of holiday lights, and was unplugging them all at the same time, over and over.  Their flashing and pulsing becomes mesmerizing.  My descriptions and photos do them no justice though. 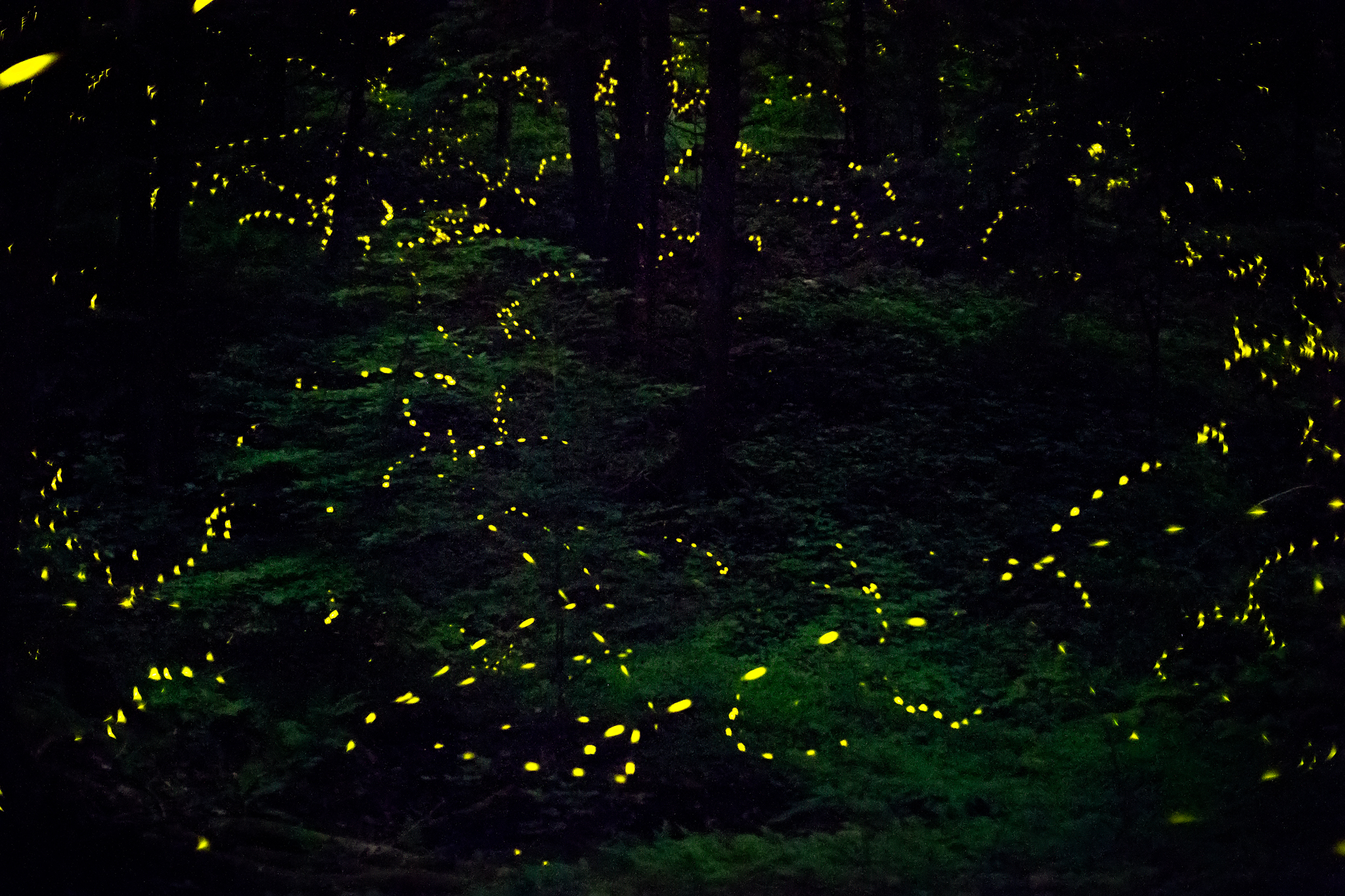 The photos above and below are in the same location.  Each are 2 minutes worth of exposures.  I just love how you can see the paths of each individual firefly.  The reason they don’t leave a trail like the Chinese Lantern fireflies is because the synchronous flash is a really fast on and off. 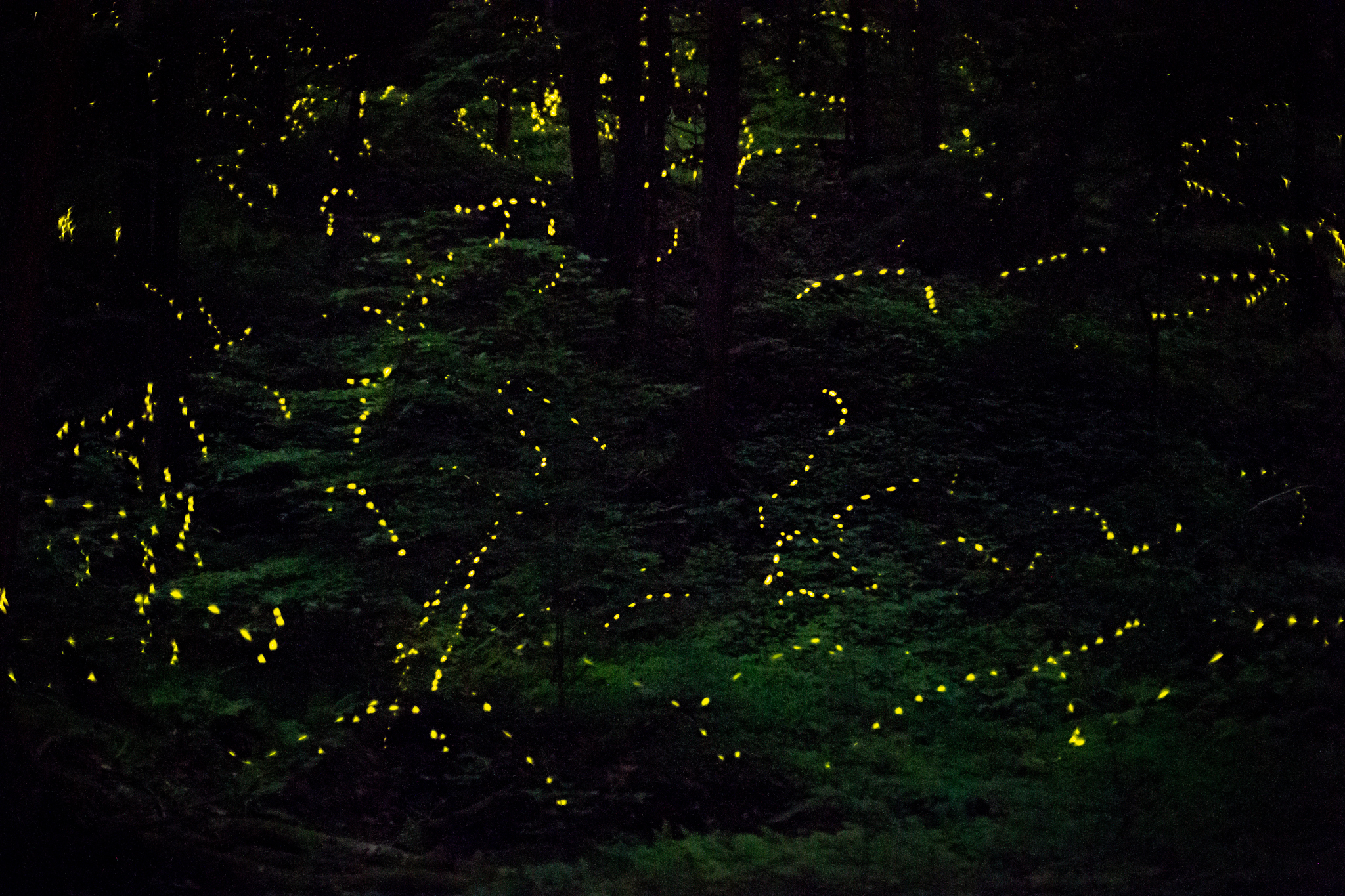 Even though these are not the most detailed shots of my trip, I really just had to share this unique natural event.  Another cool fact is that these stay active past midnight.  Even after my 18 hour day, I stayed up until past 1 AM when they began to slow down and stop. 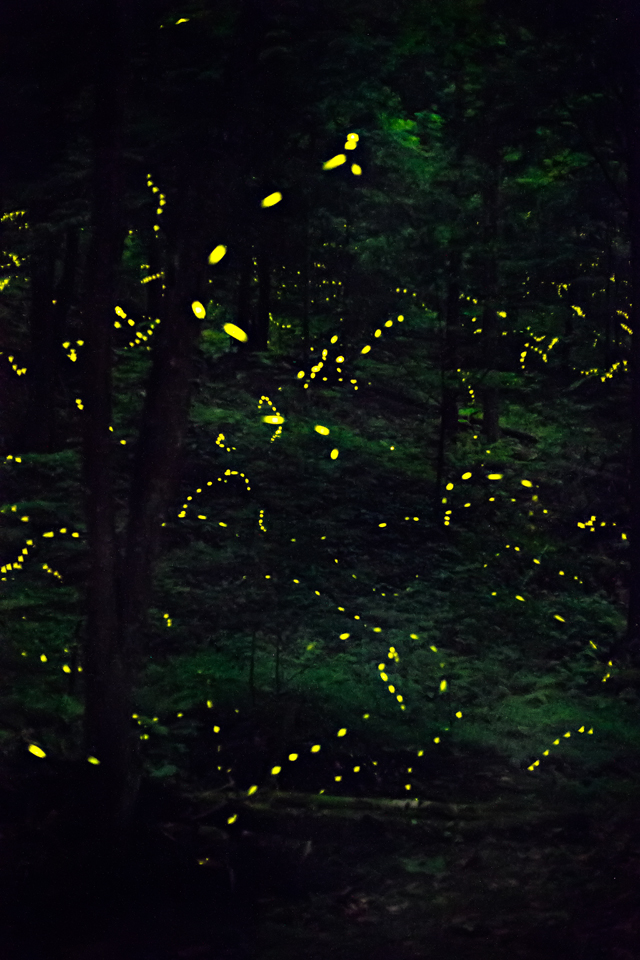 I didn’t want to leave, but I was exhausted.  This was a very positive start to a successful, but rainy, three days and nights of firefly hunting.  It was time to go back to my room, and begin plotting out the next few nights.  In part two, I’ll have some really neat photos from a few different locations to share with you all.

Click here for part 2 of the story and more firefly photos!

Leave me a message below and you can be notified of new blog posts.  Please feel free to share this!